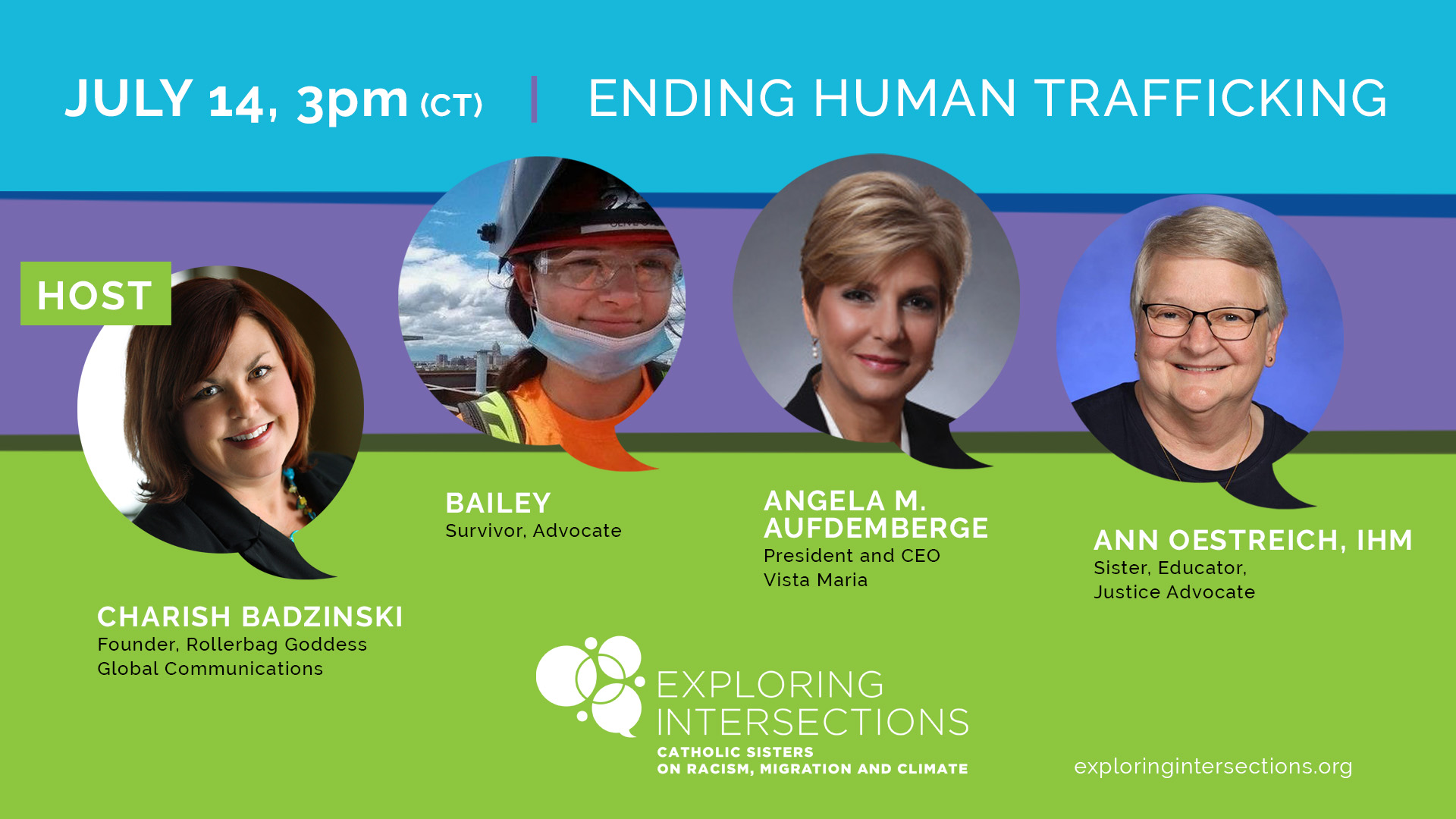 How can we help those we cannot see? How does one empower those who are in chains? Human trafficking, as far-reaching and insidious as a global pandemic, knows no boundaries—whether by online home invasions or physical coercions dressed as dreams.

Join us for our next episode of “Exploring Intersections: Catholic Sisters on Racism, Migration and Climate”—airing live at 3 p.m. Central on Wednesday, July 14—where our three panelists, Sister Ann Oestreich, IHM; Angel Aufdemberge; and survivor Bailey; will offer avenues of action along with powerful personal experiences in unlocking the chains of human trafficking as they engage with host Charish Badzinski in a forthright and compelling conversation. Registration is free and open to the public.

A former client of Vista Maria, a nonprofit serving vulnerable children and families in Michigan, Bailey is now a 22-year-old advocate for young people. Bailey was one of the first young women in Vista Maria’s WINGS program, which helps human trafficking survivors. She then moved to Vista Maria’s Shepherd Hall Transitional Living program to learn independent living skills and work on her relationship with her grandparents.

Now a graduate of Michigan’s Women Who Weld program, Bailey is a full-time welder who lives independently in her own home and reports a strong connection with her grandparents. She credits Vista Maria with helping her by providing never-ending support. “They have always been there for me—helping me find my first job and being there emotionally when I found that college wasn’t for me,” she says.

Under her leadership, Vista Maria has experienced accelerated growth and expansion. She is the driving force behind the successful development of a continuum of care for children up to age 24. One of the most significant expansions is the addition of trauma informed emergency, stabilization and reintegration programming for adolescent survivors of human trafficking.

As an advocate for children, Angela regularly provides briefings on sexual exploitation, aging out of ‘the system’ and other barriers youth face.  A recent Eugene Miller Fellow, Angela studied best practices as well as the need to improve legislation to disrupt patterns of sexual exploitation.

Aufdemberge serves as board chair of InSight Youth and Family Connections and executive leader of the Child Welfare Partnership Council for Michigan Department of Health and Human Services.

Sister Ann Oestreich, IHM, a member of the Sisters, Servants of the Immaculate Heart of Mary, Monroe, Michigan, has served in education, communications and social justice ministries. She was executive director of the Center for Justice in Buffalo, New York, and the justice coordinator for the Sisters of the Holy Cross in South Bend, Indiana. She also served as communications director for the Monroe IHM Congregation and national coordinator of the National Catholic Sisters Project. She now works with A Nun’s Life Ministry as a podcast consultant and content developer.

Sister Ann has extensive board experience, including service on the boards of the Africa Faith and Justice Network, Jubilee USA Network and the charitable trust board of the Sisters of Mercy, Detroit Regional Community. She currently serves on the boards of directors for Friends in Solidarity and Sisters Rising Worldwide, and as board president of U.S. Catholic Sisters Against Human Trafficking. Sister Ann also is the North American representative on the Talitha Kum International Coordination Committee.